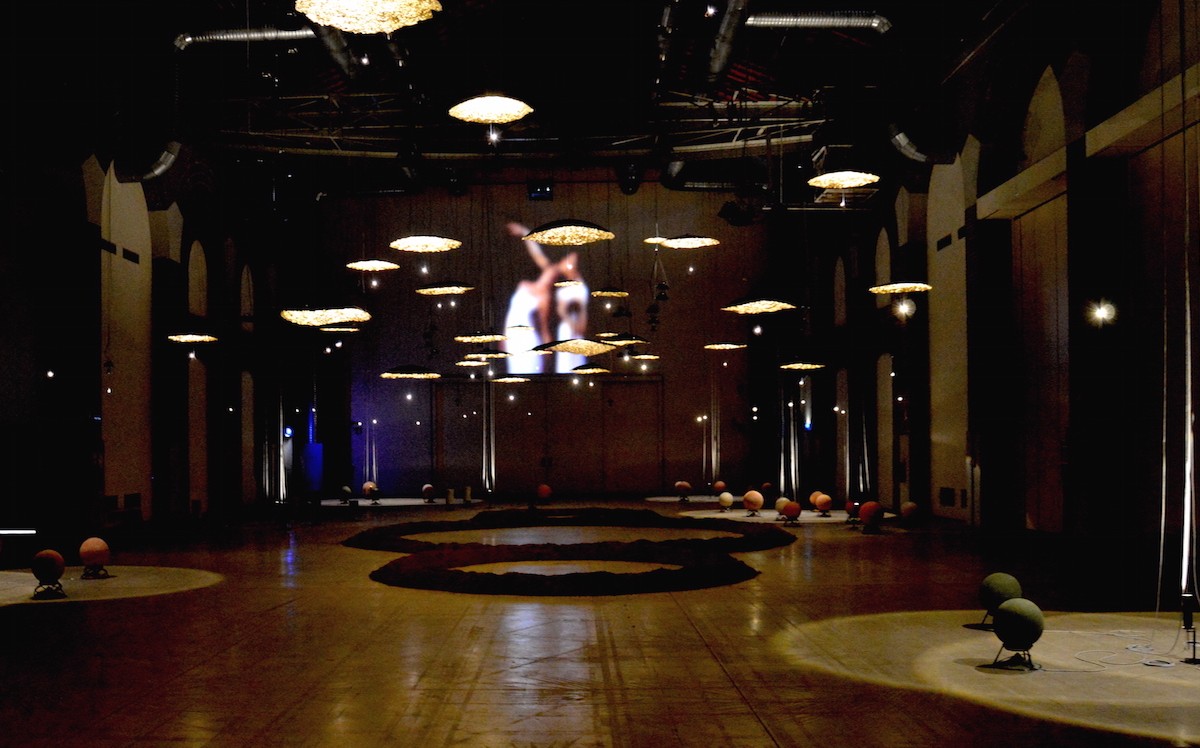 Interview with the composer Yuval Avital about Alma Mater, his last icon-sonic artwork in dialogue with Il Terzo Paradiso by Michelangelo Pistoletto exhibited until August 29th at the Cathedral of La Fabbrica del Vapore in Milan.

A forest made up of 140 loudspeakers in terracotta and stone produced in collaboration with Architettura Sonora that diffuse natural sounds and hundred of voices of grandmothers from over the world, a video installation with female images and Liliana Cosi and Oriella Dorella’s performances, the live presence of local lacemasters weaving thread through their bobbins to create an unexpected lacework, Enzo Catellani’s lights and Il Terzo Paradiso by Michelangelo Pistoletto made with local ground are the extraordinary elements that composed Alma Mater.

The artwork, with a strong multi-sensorial impact, creates a dialogue between all these artistic structures to introduce a shocking experience. The immensity of the Cathedral becomes the temple of the female universe in all its expressions: Earth Mother and Mater Familiae, revered and feared grandeur, fertility and nutriment, sensuality and tenderness, creative and devastating power at the same time.

Paola Sacconi: How did the project Alma Mater?

Yuval Avital: Alma Mater was born from my path and binds to my research on the global arts brought forward with Maga Global Arts’ project, a performing arts factory that promotes intercultural exchange and interdisciplinary in Italy.

The intersections between different cultures are divided into two big approaches: the semantic one made up symbols, patterns, themes. From this point of view, one of the great archetypes is the mother in all her aspects and nuances and in Alma Mater there are all these derivatives: cultures, visual sonic and tactile elements.

Then the structural one composed of hierarchies, symmetries and asymmetries in order to create complementarities and contradictions, density and rarefied. I worked on the composition concept in the global era: imagine a street full of people, from different countries and listen to them. Can we consider it as a multicultural sound installation? Now imagine they are only women and they whisper. A woman starts to sing, it creates a complex structure; if we add another woman singing a different song, and if we multiply it endlessly we produce a relationships’ stratification that can generate what I call “sound forest”. As in a forest, the voices and the sounds are all interconnected, intertwined, overlapping, they are born and die, giving a strong sense of organic unity.

PS: How did the composition of the sound structure from the individual voices of grandmothers to the sounds of nature, to the visual, tactile elements of the installation?

YA: The composition is inspired by the hierarchical structure Holon theorized by structuralist philosophers. An entity, already interconnected with its hierarchies, interfaces with another entity. In Alma Mater every structure of the artwork like sound installation, the performance video with Liliana Cosi and Oriella Dorella, Enzo Catellani’s lights, or the ground of Il Terzo Paradiso by Michelangelo Pistoletto has its level of complexity. They are autonomous entities interconnected with each other as a unique project.

The symbol of Il Terzo Paradiso refers to the Holon’s theme, structures’ connection. Pistoletto’s work has a wide conceptuality: the symbol travels to different places and it’s composed of different materials by developing a lot of meanings’ inclinations.

PS: Are the voices mixed or does anyone dominate the others?

YA: In Alma Mater you find out more on what you can do with the voices and the relationships between them. A complex structure that develops the double track of the balance and the opposite. The equilibrium in itself is static and therefore if you’d like to create dynamism and movement you should introduce continuous asymmetries or related symmetries.

PS: How important was your academic education and not in Alma Mater?

YA: We are the result of our way of life, our studies and our experiences.

Every work is a study of traditions and also this project is a great research. All my works talk to each other. For example, the video of étoile is connected to the work done for Noise for Syd with naked dancers and the bodypainting, but also a performance done with 16 dancers in Biella and finally it comes from my high school drama studies.

Moreover, the artist is a sponge that absorbs and creates a new form of synthesis but he is also a colander… he filters many things not to explode!

PS: Alma Mater is an icon-sonic installation but also a study, it has a strong sensorial and emotional impact but also a scientific character. How do you connect these aspects?

YA: Easily. The first real dialogue with the science was when I created Unfolding Space in 2012 with scientists from NASA and ESA. The scientific feature is another key part of the reality in which you can deduct informations and spectacular things. In Alma Mater’s case, the INGV – National Institute of Geophysics and Volcanology provided the support for all sounds of the Earth: winds, volcanoes and earthquakes.

Some sounds have a destructive meanings. In the sonic composition there are Sumatra and L’Aquila’s earthquakes, natural phenomenas that killed. In fact Earth Mother feeds us but also devours us. The installation doesn’t want to be a sentimental or nostalgic environment but it is intense, primordial, powerful. Nature Mother gives and takes life away.

PS: The voices come from different institutions and archives, can Alma Mater project be considered an icon-sonic archive?

YA: Yes. It is not an archive organized in didactic way as a informations’ portal but it’s structured to give a synthesis of emotional impact. So, it’s an archive because it receives, collects and preserves data but you can also define it an anti-archive. In fact, if the archive wants to be clear and give a quick access to the informations, in this case the archive becomes a labyrint that doesn’t allow you to get the data immediately but you have to check for them; I find them in this way, a madness for an archivist!

You arrive to this complex icon-sonic algorithm that is impossible to define for the extreme amount of informations, so you have to be perceived it as a unique thing.

PS: Is Alma Mater a work in progress and an open project?

YA: Of course. We are already in contact with Mexico and other European countries. I think when Alma Mater will be in New Delhi, I can add the dancers from Kentaki, other voices, new sections. The artwork can really grow over the years with other local embroiderers, other peasant ground and continuous changes and additions on the subject.

Surely the idea is it will be also a travelling project. First, it is crucial to find the place that lends itself as the Cathedral of La Fabbrica del Vapore. It can not be a museum or, if it is, it has to be a space that can hold the installation and with a heritage ideally connected to the artwork.

The project is a site-specific but also it’s convertible; Kiefer’s towers in Hangar Bicocca’s spaces are hardly imaginable elsewhere, for this project you can imagine different relationships and adaptations. For example I would like to take Alma Mater in ex Pescheria di Riva Nazario Sauro (renamed Salone degli Incanti) in Trieste. For now, one of the hypotheses is to exhibit the work in Rome for the Jubilee.

There will be other stops in Italy and abroad, but we have not yet chosen anything. We are focusing on this first stop in Milan: the work has just been born, and now we’re taking care of it.

PS: You dialogued with Anish Kapoor and Michelangelo Pistoletto. Which other contemporary artists would you like to collaborate?

YA: There wasn’t a direct dialogue with Anish Kapoor but with his artwork Dirty Corner, instead in Alma Mater I worked directly with Michelangelo Pistoletto. In this moment I’m working with the French director Lukas Hemleb. I’d like to work with Bill Viola but, in truth, it is very easy for me to build a dialogue with other artists. In fact I’m anti-individualist. The Alma Mater family consists of me, Catellani and Pistoletto: as a band, every artist gave his talent for the emotion to work together in an art project without knowing the final impact.

I love to create the ensemble and I don’t feel threatened by the comparison but if anything inspired. I start with great examples such as the Bauhaus, the Black Mountain College to build a art coworking model.

It ‘s impossible to categorize my work in a discipline and often the anomaly of not knowing to call it in a fixed category creates a blackout into the system. Alma Mater is part of this group.

The spectators arrive, discover, and lie down, live their experiences and you meet completely different target: from the curator Martina Mazzotta to Saturnino and Jovanotti, from kids to housewives up to tourists. Everyone creates his experience but the system still doesn’t know how to define it and it remains bound to a cataloging concept of the twentieth century.

PS: What are your future plans?

YA: In Madrid there will be a premiere of Kanaf, the composition clarinet, bass, videos, electronics on the relationship between sky and birds. In autumn the Fuga Perpetua starts, a icon-sonic work about refugees realised thank to British, Israeli and Italian coproduction. For the next year I’ll plan two Reka’s replicas. Finally, I’m begining an opera in Taipei in 2017, a libretto based on the story of a writer from Taiwan with the involvement of the local Aborigines.