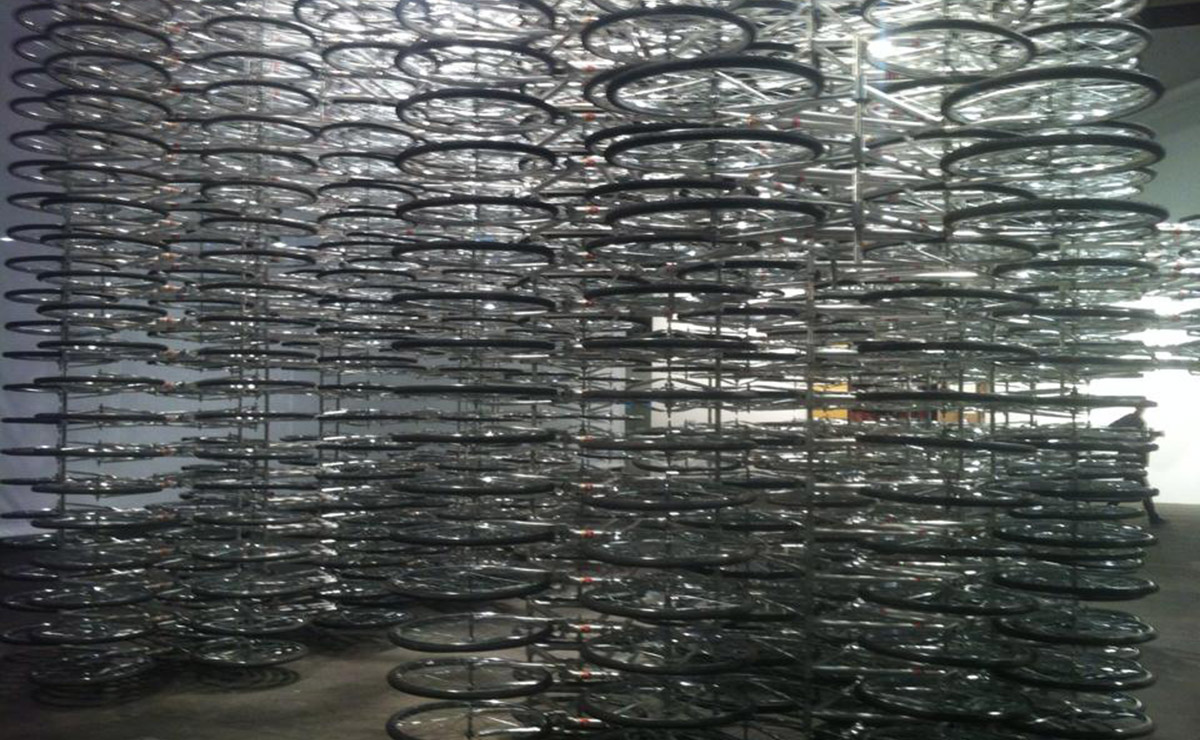 The most spectacular section of Art Basel starts with the “egocentric system” by German artist Julius von Bismarck who will run continuously around itself for all the duration of the event settled on a personal carousel including different stuff such as bed, desk and telephone.

Is contemporary art mere individualism? In Art Basel Unlimited’ current edition the real star attraction is the audience, who attends aesthetic experiences of behavior, perception of space, and content production. Different views characterize participatory projects on display: playful (Opavivarà, collective from Rio de Janeiro, encourages visitors to create their own tea and tasting itself in a comfortable hammock); productive (David Shringley invites visitors to left their portrait of the oversized and caricatured model); spatial-perceptual (assembled bicycles by Ai Weiwei; the neon installation by Dan Flavin; the Architecture cacogoniometrica by Gianni Colombo; the arc of light in the darkened room by Olafur Eliasson; the investigation on phenomenological power of color and square shape by Robert Irwin). 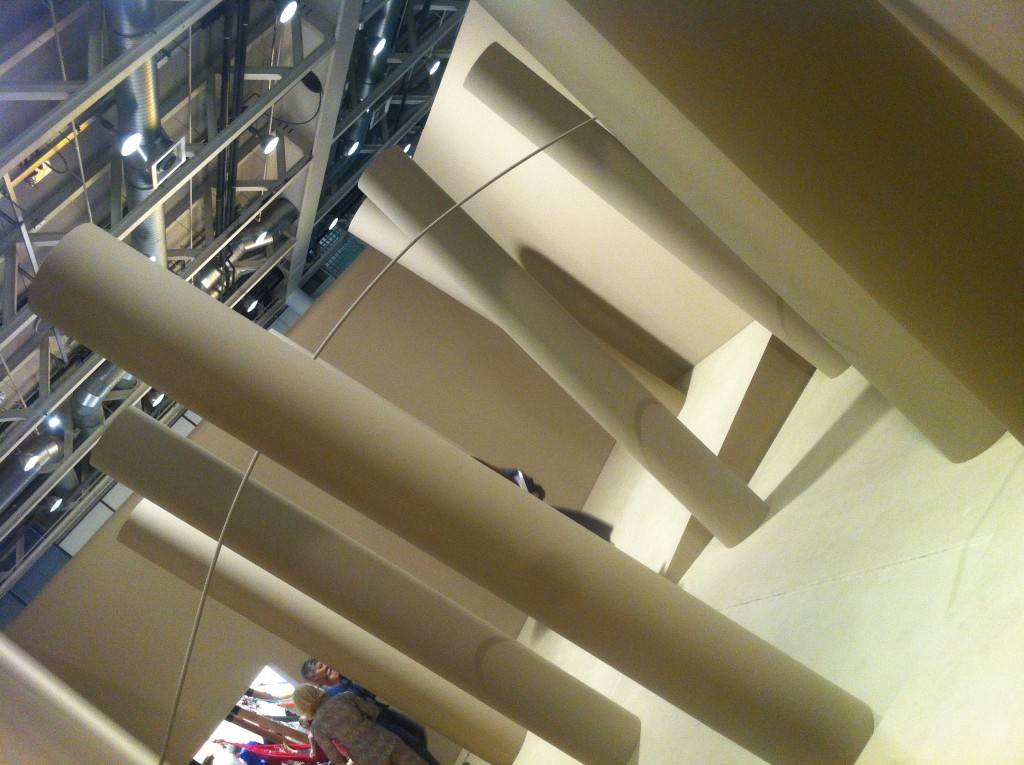 According to a clear historical perspective, the exhibition proposes projects born in the 60s and the late 80s. Franz Erhard Walther and Jannis Kounellis’ works have not been exposed to the public since 1989, the architecture of Gianni Colombo was presented at the Venice Biennale of 1984, while Officer at Night by Victor Burgin, the popular series in which the artist deconstructs the paintings of Edward Hopper grafting contemporary photographs, dating on 1986.

The idea of ​​an art developing in space also involves the installation of works by Emilio Vedova “… in continuum”: comprised 110 canvases painted between 1987 and 1988 exhibited for the first time outside the artist’ studio, near Magazzini del Sale in Venice, where is now located Fondazione Emilio e Annabianca Vedova. 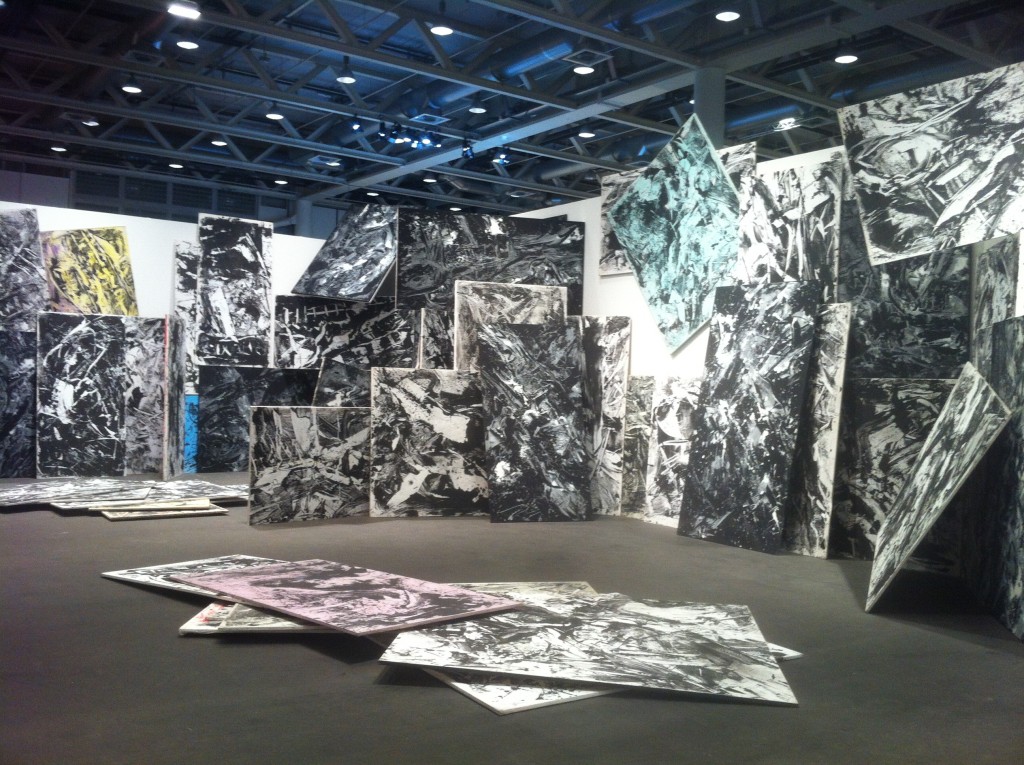 Another Italian artist’ work cuts the exhibition space, and the nationality is pleasantly surprising well represented in the international framework, at least as far as historicized artists: it is the three meters Dadamaino’ polyester painting, entitled Il Movimento delle cose (1993), marked by small written notes lost in translation.

A few notes “universal-expo-symptomatic” can be retraced in Pascal Martine Tayou’ work. It displays an installation made up harmonic trees with colored plastic bags instead of flowers, while Maha Malluh puts a composition made of aluminum cookware recovered in various markets and Bedouin villages in Saudi Arabia in a kind of archaeological research about the legacy of the Mediterranean visual culture. Pierre Huyge, instead, brings us back to the Paleozoic Era through the work Cambrian Explosion, one of the famous ecosystems series in aquarium realized by the artist. 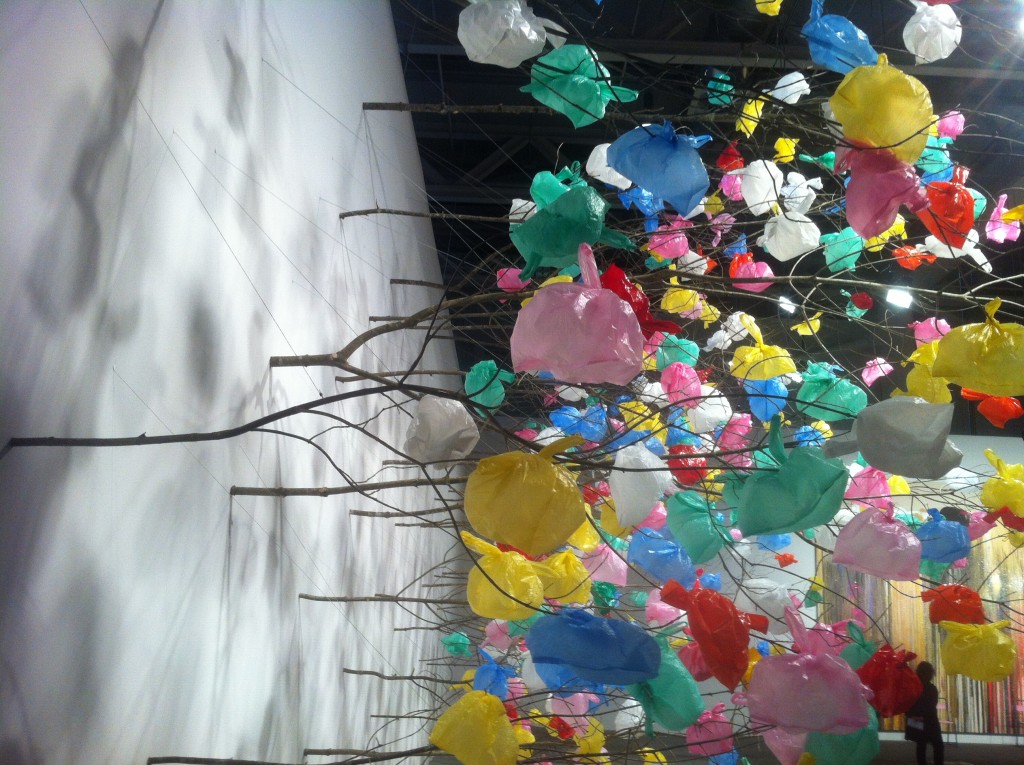 An overview of video-installations begins with the remarkable work by Russian Sanya Kantarovsky consisting in a loosely rendered painting of a nude man looking like a teenager and a projected animation that interacts with him, soulful songs and references related to the acceptance of sexual changes. The subject of sexuality is also addressed by Lorna Simpson in the black and white video (simulating a game of chess, the artist plays both the role of men and women in a continuous role game) and by Rivane Neuenschwander, who illustrates through fingerspelling the book by Bataille on the role of eroticism in surrealism.

The lightness of Martin Creed’ video on the difficulties of an act as simple as crossing the street, is juxtaposed the politically active installation by Grace Schwindt “Only a free individual can create a free society”. Here the artist looks back at the history of the civil conquests on ’60s and’ 70s by staging a surreal set and dialoguing with leftist activists of the time. In the wake of the socio-economic-political reflection, there is the project of mapping debtor countries of the International Monetary Fund (1994) by John Knight Worldebt and “Arab Spring” by the French of Algerian origin Kader Attia: it takes inspiration from the attack to Museum in Cairo, the center of the Arab Spring uprisings, and stages the dichotomy between revolution as destructive act and potential change. It consists of more than 30 museum displays that the artist destroys every time the work is exhibited.

Particularly intense is the sound-mechanical installation entitled “Disarm” by Pedro Rayes, who is part of an international project that aims to destroy firearms and reuse them to create musical instruments, according to a vitality purpose.