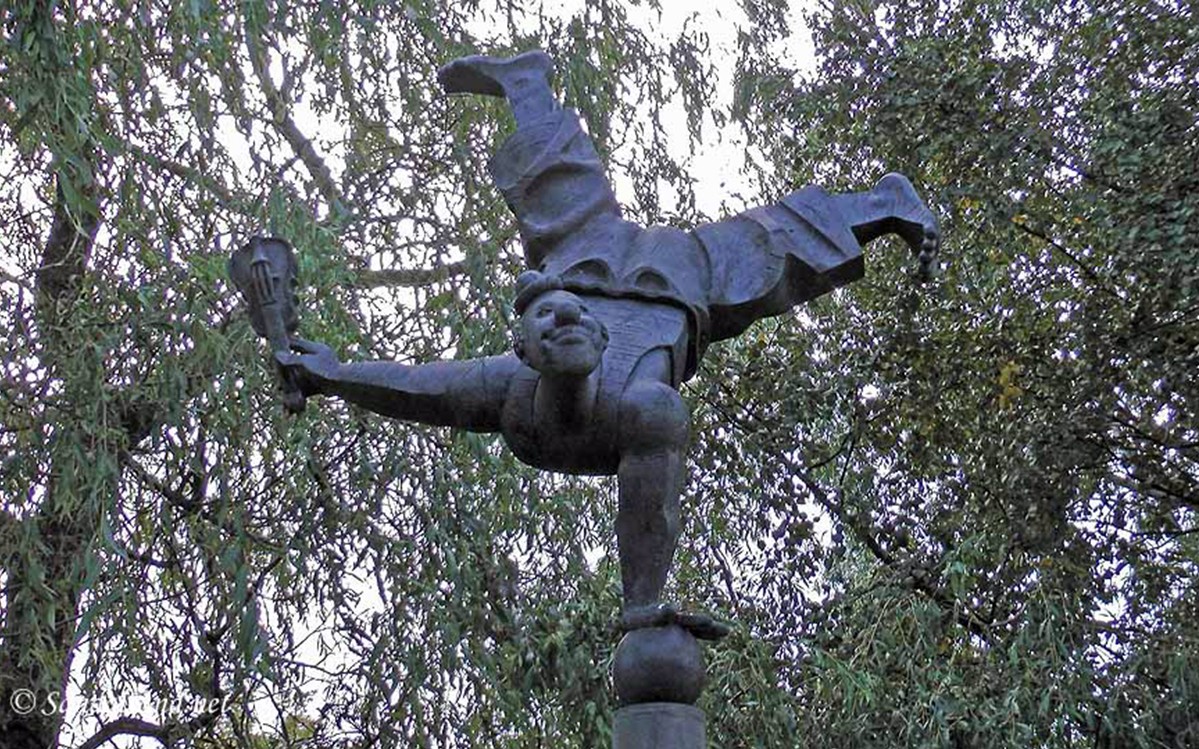 Fritz Røed between Italy and Norway: the Dionysian spirit breaks into sculpture

The last of the great Norwegian sculptors, who died 13 years ago, has left an important legacy. From the monument to national unity to girls and clowns: “Art is joy” – he used to say.

Villa Faraldi is a little town from the Ligurian hinterland of Imperia province. “The little Athens among the olive trees”, as someone called it. A mostly silent place, nestled in a valley overlooking the sea and basking between dry stone walls and fields of olive trees.

Before landing in Italy he wandered long in Scandinavia and later in Paris. He was a student of the other great Norwegian sculptor, Palle Storm, and debuted for the first time in 1956 at the Autumn Exhibition in Oslo presenting two figures of children. Children who will return in all its future production.

Fritz Roed, Swords in rock, monument dedicated to the unification of Norway

“Art is joy” – he often said to his followers and critics. All his research lives in a Dionysian vision of the universe. His vision of reality is alien to complications or transcendental visions that are not immediately apparent.

Life is good, to be enjoyed, savored, intensely lived minute by minute. Attracted by the beauty, the harmony, the deciphering of the laws of the universe that in every aspect of reality are, as soon as you want, enjoyable, Fritz Røed loves the world as it is. And when he attempts a deformation, this immediately takes a fun look, which underlines, with authentic sense of humor, aspects vaguely grotesque, ridiculous, exaggerated of the humanity.

Venus Callipigia, the Pomone, the opulence of an entire tradition of painting and sculpture not only Western, have influenced the world in which Fritz Røed tackles the female figure. A loving way, concrete, pleased by the sinuous, the swellings, the movement, the thickness of the meat.

An exultant sculpture, using a panic mythology, that places men and women in a kind of primordial Eden, where the vines are the natural ornament, vibrating muscles a joyful discovery, the “lived” a necessity. Great as a portraitist, when Røed addresses issues born from an impression, here we are with emerging reminiscences: the Picasso’s Vollard Suite in the “golden plates”; Giacometti in the verticality of some women on stilts, or even in the desired roughness of the symbolic swords dedicated to the unification of Norway, perhaps his most famous work.

We can find two natures in Fritz Røed, two styles, multiple ways to deal with the sculpture. A realistic vein, supported by a safe and  masterly craft in portraits; a vertical and shocking way in the allegorical compositions, where the invention makes use of the unfinished and the roughness of matter, sometimes even the color, and, again, a way of fun, light-hearted, slightly irreverent but always dictated by human understanding and tolerant, if not complicity, participation.

Fritz Røed left to his native town (Bryne) 10 works, that joined the Fritz Røed Sculpture Park, to whom he has personally worked until his death. “A hymn to life”, in which the sculptor – imagining the theme park as a song – ideally leads to hand the visitor through themes such as freedom, joy, peace, hope and joy of living.