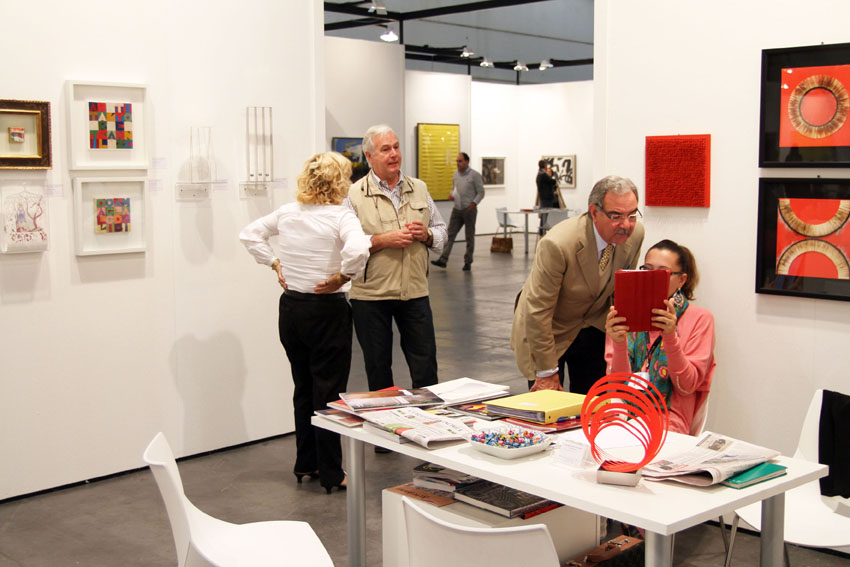 Interview with Andrea Bruciati: from ArtVerona fair to the theme of archiving

Andrea Bruciati, art critic and curator, with decades of experience in the management of museums, is now the artistic director of ArtVerona, an event that aims to place the art fair, competitively, in the Italian and International trade fair scene.

A strong sign of maturity, the acquisition of ArtVerona by the Verona Fair Company: the assignment – in collaboration with Domus Foundation – of a budget of € 100,000 for new acquisitions, € 60,000 euro for modern art and € 40,000 euro for contemporary art.
“A very strong signal of investment towards this project which places Verona as mature and competitive compared to other European countries.”
It is expected that over 10,000 visitors will be attracted by a connective tissue of cultural events involving the whole city; among them an art project, a viral video that affects the offices of the Municipal Library, the University, the Academy and the Museum of Castelvecchio.
“I think the fair must be connected with the rest of Scaligeri’s cultural environment as a driving force of renovation.”
We direct to the art critic some questions about the specificity and content of his art direction. 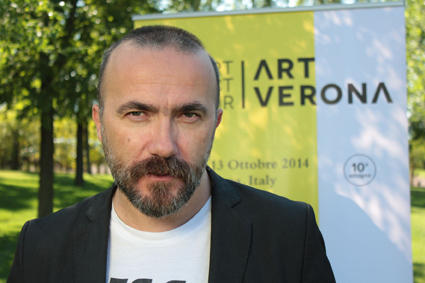 Two exhibitions presented at the fair are characteristic of your artistic direction, imprinted by a dialogue between historicized artists and emerging talents: the focus on Enrico Castellani and the project 2000Maniacs, a reflection on painting as a language of innovative research. Which are your decisive curatorial choices?
I think of the event as a challenge to reaffirm the quality of the Italian art fair system, which is unfortunately really weak compared to the International context. ArtVerona has the specificity of wanting to be a showcase for everything that can be understood as “Italian” in the broad sense. There are great artists and high-quality galleries that are not sufficiently well known; I like to think of ArtVerona as an art fair representative of the quality of the creative factory of the Italian peninsula. Following this principle, dealers and galleries who come from abroad but of Italian nationality, were invited to promote Italian artists. I therefore conceived the art fair as a dynamic platform that privileges the comparison between artists, both from a geographical and chronological point of view. This is the context for the discussion between different generations; in the section of the fair dedicated to modern art there is a tribute to Enrico Castellani, an acknowledged master in the International scene, while in the section relating to contemporary art we propose a moment of performance and active comparison: more than 50 artists will build, during the fair, a kind of tree structure in progress that gives the effect of a seventeenth-century ‘quadreria’. I think it is important to create bridges: there can be no innovation without awareness of our roots. Where there is a reflection on our history I think there is also a speech quality that arises as a germ of a development for future art. The choice of the media of painting helps me, because a painter who has no awareness of history has necessarily a weak labor or a labor only related to fashion of the moment.

MyTemplArt Magazine addresses several issues related to the archive in the art system; inspired by the presence in Art Verona of the archive of Ben Ormenese we wonder if even in art fairs an explicit integration of the art archive in the market chain begins to emerge in a positive way. What is your opinion about this?
Our event is titled ‘art fair project’: we believe absolutely in the projects and constructive initiatives. The archive is a construction project on memory. Last June we held at H-Farm (Roncade, Italy), the well-known incubator for start-ups, a day of brainstorming with artists, collectors and curators, with the aim of redefining the role of the art fair in the face of a leveling international supply. We worked to find alternative projects that would give a strong identity to these issues. The discussion of the archive is located in this context: indeed, we believe that there can be a motivation for the future only if there is a clear awareness of our roots. I supported and promoted in the fair all the realities relating to the conservation, restoration and collection of cultural heritage. For example, the focus of Castellani has been realized in collaboration with the Archives of Milan, just because there was the need to provide the scientific basis for the works presented. Thus the system of the art fair becomes a cultural fly-wheel in the current scene of international art, collecting an important social responsibility and acting as a motor stimulus much more active, positive and productive, especially as the area in which it stands, is responsive.

Often we found ourselves in front of art collectors who were in difficulty in finding information or relate to the archives or foundations. What is your experience in this regard?
The collectors should have all the advantage in collaborating with an institution that certifies their investment and vice-versa, the Archive, as the depository of the artist’s memory, should be receptive and open to the demands of society. I prefer not to go into the organizational logic of the institutions who work for the protection of an artist; certainly not all archives or foundations have a structure or economic means to maintain their own activity. In my personal experience, as a researcher and curator, the relationship with the archives of Fontana, Manzoni and Castellani has always been positive on all fronts.

According to your opinion, do contemporary artists feel the need to archive their artworks?
In the last decade this has been one of the necessities and a problematic source of speculation: there is a tendency on the part of several artists to work on the argument of the document, the origin, the archive. I believe that in a “liquid” society artists feel more and more often the need to retain the life experiences linked to a system of elements, with the aim to define an identity in contrast with the flow of information. It is indicative that the artist foresees what are the issues and the state of the society in which they live, with its contradictions and weaknesses. Even the very young artists, who have to deal constantly with social media, rediscover the photo paper, by attending flea markets and reflecting on the biographical point of view of their family, or about their family tree. Even for painters the renewed attention to the media reflects, in my opinion, the need to get back to a measure, to an intensity, sedimentation of memory that is threatened every day to be replaced by the present.

The art fair could be a place for discussion on these issues?
The fair is a network that can effectively promote many issues and get to the public at a rate not known by public facilities. If properly interpreted, the fair can be a positive phenomenon in our society of the spectacle, capable of giving a deep mark in our imagination. I hope that ArtVerona becomes a platform capable of receiving even radical changes if requested by society: in this sense, achieving the right balance between the market and cultural offerings, the event can reach a momentum of development.