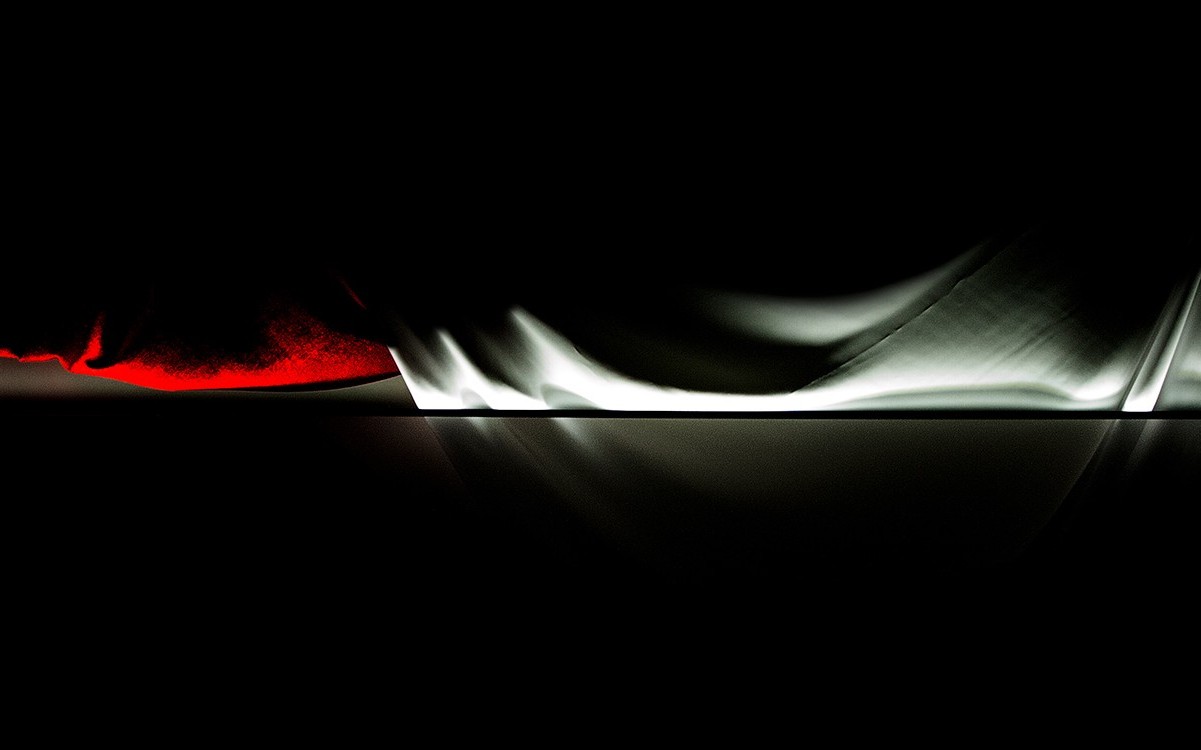 Interview with Alessio Ancillai: art between physical and psychical dimensions

Today we met Alessio Ancillai, an artist from Rome who, thanks to his medical student background, went deep to the heart of relations between physical and psychical dimensions, in their complementary rational and irrational parts.

In his last exhibition at Pio Monti Gallery entitled “Umano Specie Specifico_luce e sangue” (“Human Specific Species_light and blood”), through the highest stylistic canons, the artist by using different media, pushes the audience to think about an idea of light, different from the standard one, through a critical analysis coming from the Enlightenment thinking.

By examining his work, we have noticed that Alessio Ancillai adopts in his research a non-conventional method: given his scientific background, his cultural vision follows two utterly opposed projects. Then starting by a research on what characterised the human being in his physiological aspect, Ancillai also suggests dynamics aiming not to consider those human specificities.

The investigation is therefore developing in two strands: from a side “Umano specie-specifico” (Human specific-species) from which the recent solo exhibit at Pio Monti with the chapter Light and Blood (with critical essays by Angelo Capasso and Mike Watson), as well as the exhibition at the Eliseo Theatre Abandoning reason generates fantasy (curated by Ludovica Palmieri). As a counterpart, Morti Sporche (Dirty Deaths) at Garage Zero with the chapter Curriculum In Vitae (curated by Mauro Piccinini).

With the solo show at Pio Monti’s Contemporary Art Gallery, Ancillai has tried to express, right in the UNESCO’s International Year of Light, that the Enlightenment light does not brighten brains, as the human being is not characterised by a rational thinking. The use of LED marks the division between these two coexisting worlds, but, in the mean time belongs to both aspects, the link between res cogitans and res extensa according to Cartesio’s reasoning. Ancillai, a multimodal artist, described by Angelo Capasso, proposes such a subject where the means  becomes metaphor of the element which from time to time is required to be told.

The other study, “Morti sporche” (Dirty Deaths), the artist draws  inspiration from the tragedy of deaths at work to consider how satisfying needs, defined by Marx “an eternal natural need to mediate the organic replacement between man and nature, that is human life” could cause the interruption of life itself, due to disinterest of the human being toward another human being.

Ilaria Carvani: Alessio, how about your interest in the artistic production? Has it always existed or took over it spontaneously during your studies as means to undertake an investigation path?

Alessio Ancillai: Fortunately, I have always breathed an air of art and culture in my family, especially cinema and painting. I have good memories about me as a little boy with my father while he was painting, so I started to feel the smell of oil paintings. In preteen age, I used to write poems that actually were thoughts, and in that period, I started enjoying with temperas. Over time, I learned new painting techniques, still for fun. Getting older, I improved, studied and deepened techniques, but I did not think about me making a professional carrier.  I was interested in medicine and passed my university entrance exam. Later as a student, I worked as a tutor in a psychiatric therapeutic community, I hold workshops at a local medical institution and at the same time I used to paint and was searching for the hidden sense between artistic productions. Both subjects, art and medical studies were becoming more closely and linked together and the medical studies were becoming the inspiration for the artistic researches… Then I started exhibiting. Studying, working and painting was getting pointless, so I decided to devote myself to art. I put my life on the line with Art and the research path within my art was definitely also influenced by the medical sciences.

A.A: The two work series are deeply related as they allow myself to deny the idea that the human being is characterised by the rational thinking, and that evil, affliction and original chaos can be found in the irrational. With “Umano specie specifico” (Human specific-species) I try to define the characteristics of human being, whereas “Morti Sporche” (Dirty Deaths) deals with the dynamics dehumanising his nature as a human. In “Morti Sporche” (Dirty Deaths) I borrow the tragedy of deaths at work to state how crazy to fall ill, or die just to satisfy our needs, and how all this is inalienable for our self-fulfilment. Animals, over their whole life meet their needs in order to survive and for their species conservation, for human being is not enough. Accordingly, the investigation focuses on the difference between requirements and needs. I like to believe that needs must to be guaranteed to everybody. We cannot pursue our needs as priority aims, this is only linked to body, space and conscience. We spend over 33 years sleeping, even if it seems obvious, when we are asleep we are not dead. 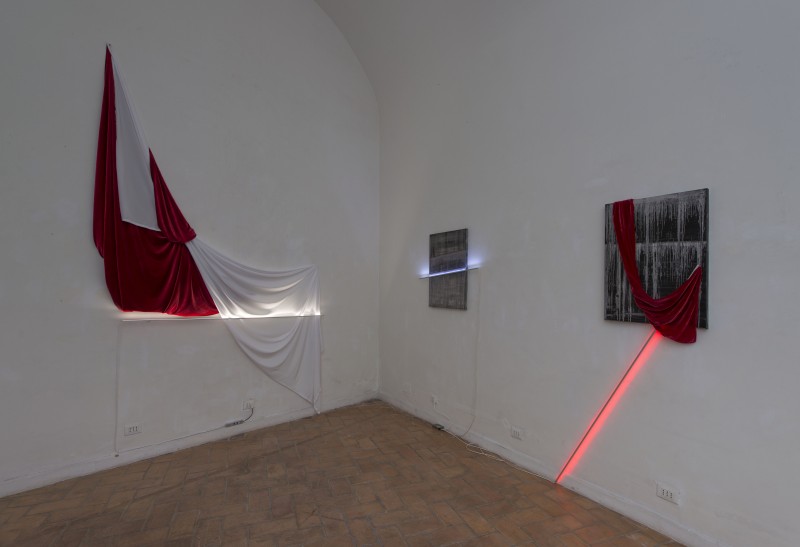 I.C: According to an overall view about your work, it is natural questioning about Image as  nothing but an expression of a relationship between rational and irrational. I refer to  your work Abandoning reason generates fantasy. I explain that in a better way: are these two elements interdependent and essential in analysing and understanding an image?

A.A: This question, besides being complex, needs philosophic, psychiatric and linguistic features to come into play. Image is the non-verbal expression of a deep thought, non-rational as it does not communicate through an articulate speech, but through shapes, colours or just lines. Just think of dreams, turning up in our sleep, when our body is still and silent at night. So, our irrational and unconsciousness mind builds fantasy images, because, by contrast, rationality only depicts and remembers picture already seen and sounds already heard and learnt. Instead, the artist can create images during the waking state, which is necessary to handle instruments, canvas, lights and… technique. Within the artist there is a sort of transformation, so despite remaining “conscious” and “rational”, images appear from deep and cannot be the exact reproduction of perceived elements. And those images are not dreams, as the painter, the sculptor, or the musician are awake, speak, move, but at the same time let this irrational and deep reality arise to create something, an image that did not come out before, as elaboration of the past.

The link between rational and irrational is therefore the basis for any artist’s creation. If there was a total split, a barbed wire, between these two psychical dimensions, there would be no possibilities to create universal images, sounds or poems, as reality without consciousness would be hidden or even cancelled, losing its imaginary dimension.
The artist cannot make his work while sleeping because his body is motionless. He needs wakefulness and consciousness, but not rationality. In other words, the artist, at the highest realisation of his identity, can express an irrational language through images, by putting rationality aside.

For that reason, there is not dependence between rational and irrational, because there must be no division. Maybe there must be a good separation between sleep and waking state. Surely, artists need both rationality and irrationality, the first one to make the best use of instruments and technique, and the second one to build a fantasy image, which rationality will never be able to generate.

I.C: We ask you a question about archiving; do you feel that a regular cataloguing could be an additional element for safeguarding?

A.A: Few years ago for the first time I was with a collector asking me to show him a work of the first 90’s. I was astonished, as virtually imagined his face watching my first oils, and just after a second I was wondering “Where are they”? I had no pictures, not even on some hard disks, who knows where… Luckily for me, on the upper floor of my family country house still existed a wide room where I grew up from the ten years until I moved, a room that was my house, my studio, my living room. There are many artworks of mine there now, and I am arranging for, time permitting, taking pictures of them, wrapping them up and cataloguing them, and finally archiving them in a dedicated hard disk.
Starting to think of cataloguing was good for me not only to put order, but also made me think of the respect for my works and one’s own past. A regular cataloguing as element for safeguarding? I really guess so, I have been considering this issue for a while and I see that, besides being necessary to find some artwork quickly and for the historical memory, makes me recall some stages of my life which are essential to me nowadays to acknowledge and understand even more. A safeguard of artwork but not only, of my own experiences, as well of those choices that created the very same works.