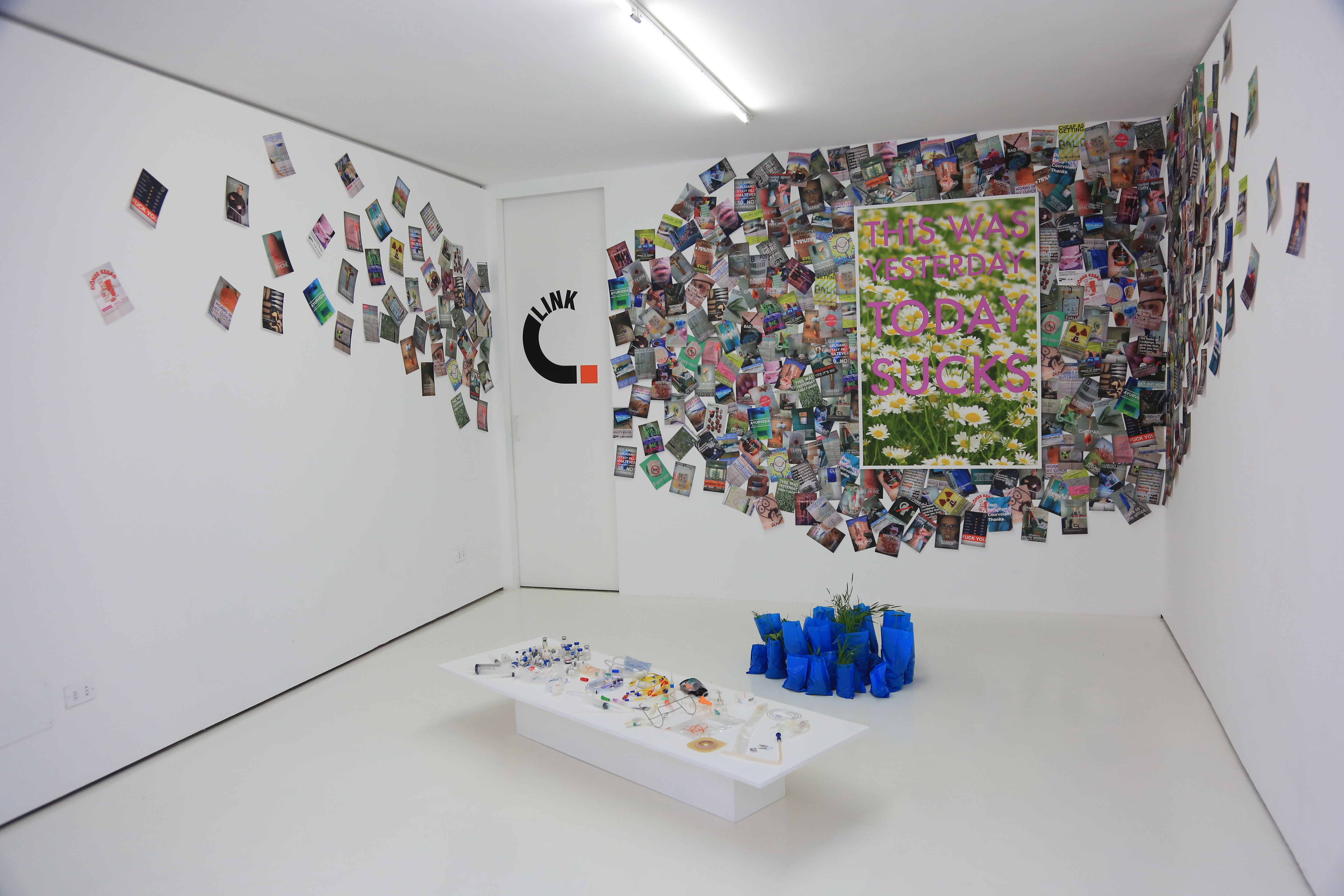 LINK Center for the Arts of the Information Age in Brescia, The first Media Art Center in Italy

Since some time on, artistic practices linked to the “New media Art” seem finally to have served a limited presence within the critical debate; rightly considered representative of an age in which the digital media is strongly present…

They shape the political, economical, social and cultural organization of the world that we live in, so, to what extent the net-art finds plenty of room for expression in the artistic Italian context? We met Fabio Paris and Domenico Quaranta, Directors of the Link Art Center, an institution based in Brescia with a strong international vocation involved in the promotion of the arts connected with new technologies. We talked about the activities of the center and about themes such as preservation, authentication, market and academic education.

Ilaria Carvani. I would like to start this interview with a brief introduction about your path as net-art researcher.
Domenico Quaranta. I started getting involved in net-art over the last years of university. My thesis served as a pretest for investigating this field by deepening the subject in a historical-artistic perspective. My research was focused on an American site easy to historicize called Adaweb, which was on line from the 1984 to 1998. It commissioned works to international renowned artist such as Holzer and Weiner – who before did not have any relation with the net – by giving technical support to produce their work on the web. Once graduated I wanted to maintain the focus on these subjects, in Italy almost no-one talked about it, aside from Valentina Tanni with her periodical Random.
Fabio Paris. I started studying net-art when it was born, in 1984 more or less, with pioneers like Vuk Cosic. In 2000 came about the idea to open a Gallery and I started with more traditional art as a matter of surviving on the one hand, and on the other hand waiting to understand the evolution of artists and new technologies. In 2003 I began to insert the first artists who worked with digital media like Eva and Franco Mattes. I finally came across Domenico after his graduation and over the years the acquaintance turned into collaboration: the first experience came in 2008 with the organization of the exhibition in Bruxelles Holy fire. Art of the Digital Age. We were already fed up being asked “But what are you selling me, a floppy disk?” and that was the appropriate opportunity to prove that net-art, and the art connected to the telematic medias, could be the subject of collection. The works in the exhibition were all indeed already sold.

When and why did you decide to convert the gallery in a non-profit space, the Link Art Center?
F.P.: The gallery closed in 2011 and over the last years its activity developed in a multi-level reality with different projects. I strengthened the relations with institutions, curators and media centers abroad. It was interesting to increase the range of cultural proposals without boundaries to the market logics, and to be able also to communicate with the institutions without risks of conflict of interest. A couple of years later we decided to re-open this space giving it a project space identity, a place which could connect us with the urban fabric and at the same time interact with the outside. 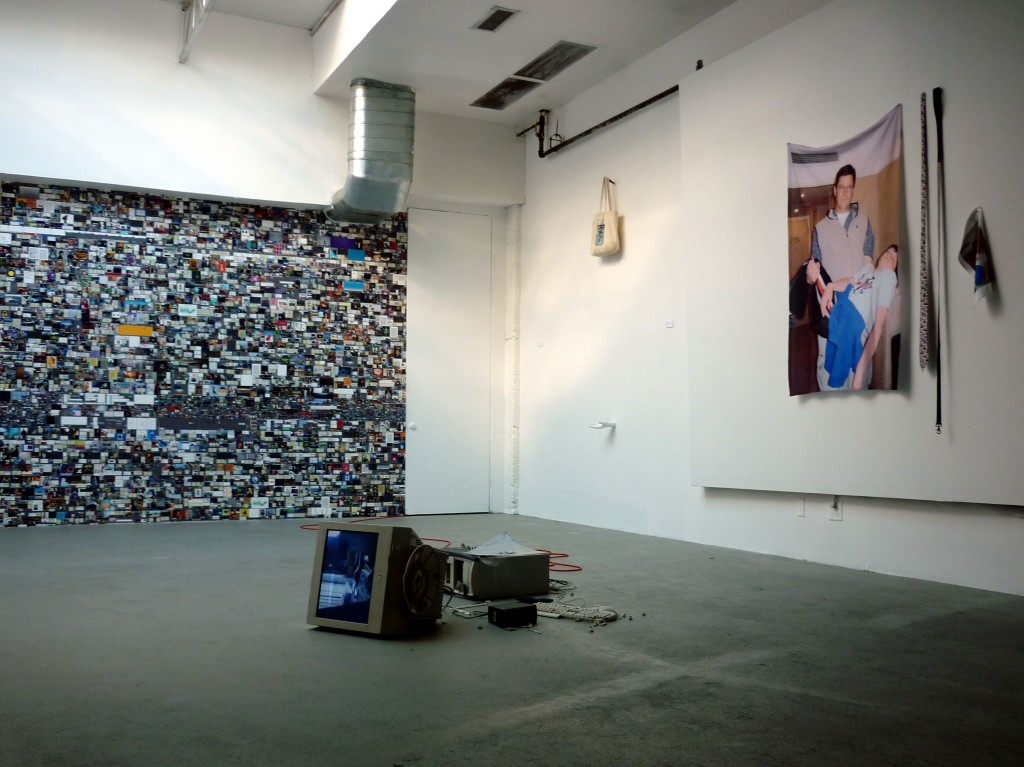 Which is the Link Art Center’s mission?
D.Q e F.P: The purpose was trying to import in Italy the media center model, that is an institution that works on the relation between art and new technologies. Abroad there are many of them. Moreover it was important trying to update it, as the idea was born in the ’80s and ’90s, an era of actual segregation of this kind of research by the contemporary art world. We were interested in studying how the arts reacted to the digitalization of cultures. The international character of the project is the essential feature: the Link Point allows us to be present on the territory, but also to produce works that through a careful documentation permit us to get attention from outside.

How the Link’s exhibition activity is carried out and how you plan the program?
D.Q: Actually the only real space is the site, the only place where you can see the projects’ activities. The exhibition at Link is only visible the night of the opening, a choice we made at the beginning, in order to respond to the need of the local public. However, our first exhibition Collect the WWWorld. The Artist as Archivist in the Internet Age http://collectheworld.tumblr.com/ has been displayed in two international spaces as well, House for Electronic Arts (HEK) in Basel and 319 Scholes in New York, that has contributed to build a much more important attention from abroad than the one we reach here. 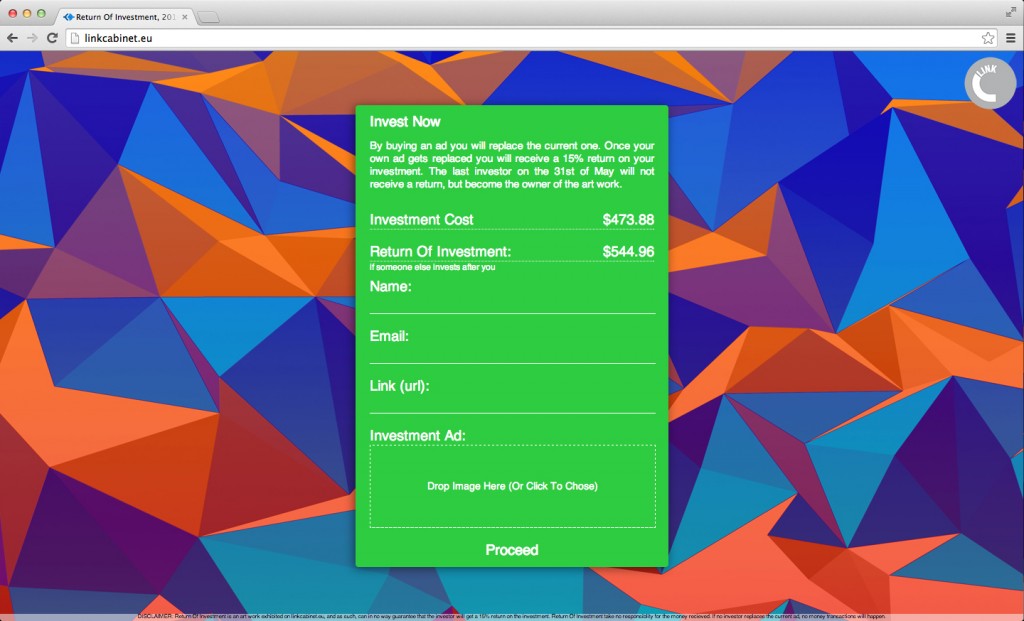 I would like to analyze with the readers the themes of conservation, restoration and authentication of net-art works. What are the methodologies and the criticalities?
D.Q e F.P: This question should be modulated work by work, some work is digital and wants to remain digital, so we can factually acquire the software or the website. At other times, as for Rafael Rozendaal’s works for example, we can draw up a contract which guarantees the public maintenance of the site. Often it is the artist himself who makes it available to restore the site by the varying of the browser. The case of the Whitney Museum of New York is emblematic: there took place the first net-art work restoration, the Douglas Davis’s World’s First Collaborative Sentence that has gradually lost its functionality due to technologies obsolescence. In 2012 a team took on the responsibility of the restoration which took more than a year to conclude and now it is possible to see both the historical version with the original browser and the restored version.
The authentication, as for all the traditional works, describes all the aspects, with specific attention towards the editions; the procedures are similar to the performances ones. If we think of that, net-art is much more material than other expressions, as for example, performance.

How do the new generations deal with this research field? There is proximity between the academies and net-art?
D.Q e F.P: While the Italian Museums are still a step back on the purchases and the market remains too much of a traditionalist, the academies, from a certain perspective, seem to be one step ahead: from 2000 they started to open departments dedicated to the new technologies, Brera was one of the first, now almost everyone has its department, and where it does not exist, there is anyway the opportunity to attend a single course. There is a good level of information. What you would expect is that the art system would respond with an adequate production, but this is not the case. The reason for this lies perhaps in the departments and to the fact that the courses are seen as place of technical training not so much for the artist but for designers who work on the web. The lack of a real inter-disciplinary collaboration between the different departments could be one of the reasons of this educational gap, so we have many skilled students with a scanty artistic culture. Those who translate their work into artistic practice are rare exceptions.

The LINK Art Center is furthermore one of the winners of the european programme Europa Creativa 2014 – 2020 with the project MASTERS & SERVERS. Networked Culture in the Post-Digital Age, developed with four partners from as much european countries: Aksioma (Slovenia), Drugo more (Croatia), Abandon Normal Devices (Great Britain) and d-i-n-a (Spain). Supported by Europe, for 24 months (September 2014 – August 2016), the four partners will create a number of events, exhibitions, publications, seminars, intended to investigate the web culture in the post-digital era.