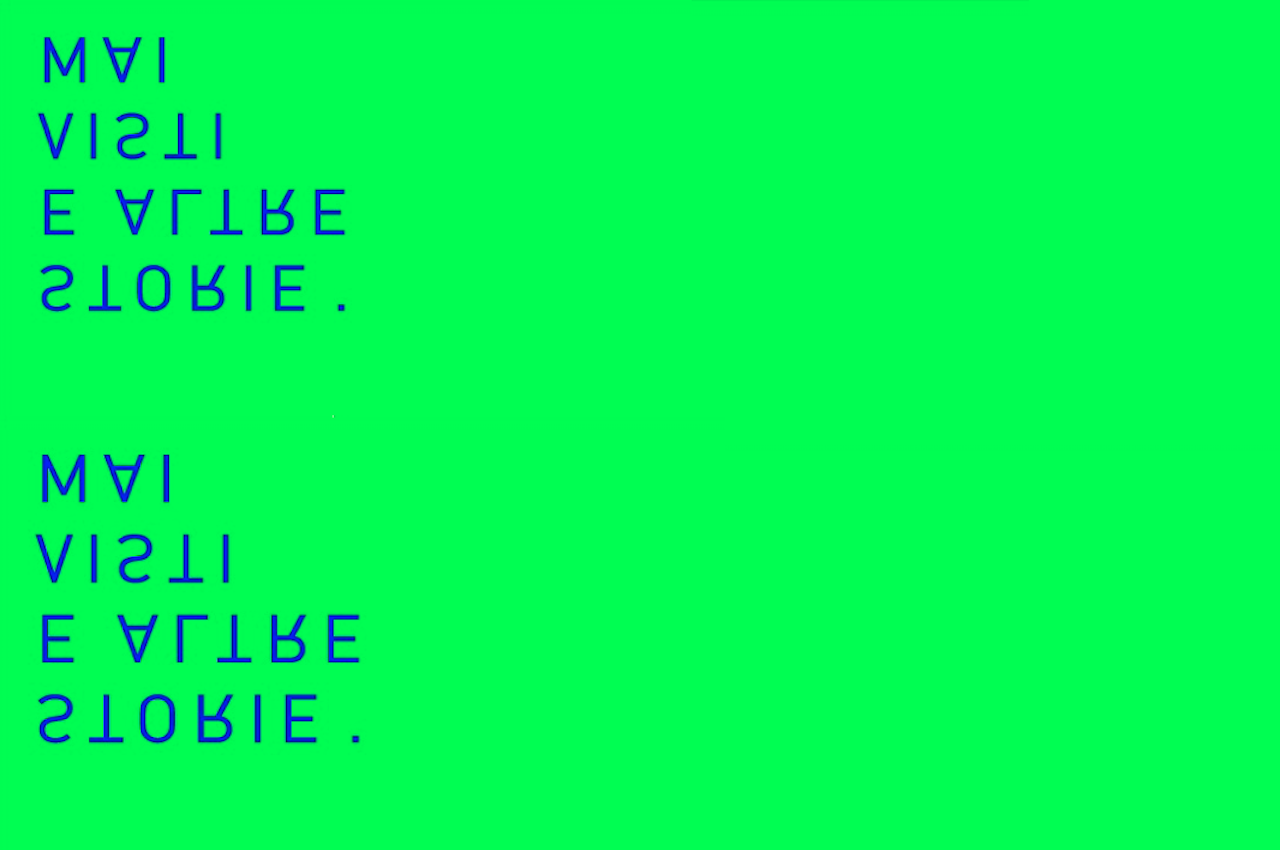 The initiative Mai Visti e Altre Storie curated by Annalisa Pellino and Beatrice Zanelli from Arteco highlights the problems related to the storage, conservation and enhancement of Irregular Art in Piemonte.

Mai Visti e Altre Storie is the web archive for the conservation and enhancement of Irregular Contemporary Art in Piemonte, artistic and cultural heritage otherwise at risk of dispersion. The project, a collaboration between the artists, the professor of Clinical Applications in Art Therapy for the City of Torino, Miss Tea Taramino, and Arteco Association, has allowed the creation of a free database access for consultation and sharing of the local artistic heritage.

In order to promote and make art as a common good Mai Visti e Altre Storie began a series of solo exhibitions of the artists present in the archive curated by Arteco (Annalisa Pellino and Beatrice Zanelli) with the collaboration of the Cultural Association Passages.

The first artist showed at the prestigious hall of Palazzo Barolo, decorated with frescoes of the Lombard painter of the seventeenth century Legnanino, is Rossella Carpino, whose works related to the period between 1981 and 1988 are kept at the laboratory La Galleria(Circoscrizione  8, Torino).
Lella, as she sometimes signs herself, performs in her tempera drawings on paper a serial execution of human and domestic figures which are then hidden and covered with vivid colors and saturated up to make disappear the hallmarks of people and landscapes. The intimate sphere of the Sé is negated by the color that makes these simple images almost iconic. Other object exhibited and repeated serially is the shoe, a personal item, an accessory relating to the proper feminine personality in this case established by the presence of a discernible pattern.

Each of these subjects is repeated with a procedure as if to press and it is actually in this gesture that will fit the serigraphy project Print About Me, a collective able to make limited edition prints of the same original works by Rossella Carpino.

Valeria Ceregini: Being the creator of the project when did it become necessary for you to carry out Mai Visti e Altre Storie?
Tea Taramino, Arte Plurale, City of Torino: Mai Visti e Altre Storie, among other things, is also a natural development of my method of work in conducting the activity expression: I started to preserve and to date the works produced in the laboratory since the early 80s, to study progress, changes or repetitions in participants. So I have seen, in some of them, considerable aesthetic qualities: rhythm, signs, colors and fascinating shapes, unusual and original, this got me passionate and practice of guarding has become the protection will of such beauty.

I started looking for a dialogue with other interested colleagues and, on this basis, we formed in 1983, the study group “Pittura Intercentro” which brought together public workshop of the City of Torino  and Province. In the following some colleagues had ceased activity and they left me over works and documents, which still I keep in my laboratory La Galleria, Circoscrizione 8.
I also started moving through social services, including those of social cooperatives, to collect works of authors, often not understood, because they were considered repetitive and whose works, regularly, ended up in the bin.
My first draft of documented archive dates back to 1986. It was a bit naïf, however, I had already hoped for a meeting with archiving experts. A desire that had to wait for the lucky meeting with Arteco, in 2012, who then gave its present form in 2015.

V.C.: You’ve always been interested as an artist, curator and art therapist in this type of “spontaneous” art that is born and lives outside the conventional art circuits. What are the reasons that have always push you towards the art of those who are marginalized because, most of time, suffering from psychiatric illnesses or disabilities?
Tea Taramino: I found myself there by chance, as a young job-seekers I participated – in 1975 – to the first and only competitive state exam for the care sector, which provided for an artistic education and that seemed interesting.
The real involvement was born, gradually, in the workplace – in the meanwhile I was improving my skills by working and studying – there were opened to me, in front of my eyes, visions of worlds, unique and extraordinary languages; since then I have not stopped exploring meeting methods and enhancement of these people that I consider worthy of the attention of the art world and the official culture. I must say that, in particular, the Disability Service of the City of Torino has always tried to support, consistent with institutional priorities, the cultural vocation of us social operators.

V.C.: Very often we cite the Art Brut, according to the definition given in 1945 by the French artist Jean Debuffet. More recently we turn to art marginal as irregular art according to the art historian Bianca Tosatti. Do you think this art can be fixed in categories of definition?
Tea Taramino: I believe that authors and works according to the observation point and the use that can be done in various contexts, can change position. Moreover, I believe, it’s difficult to classify when you are moving within very discontinuous border areas, mobile and busy, like those in which we operate: reality where some authors are coming and going from one area to another, from the comfort to the discomfort.

Categories can, relatively, only work if you declare an observation point, because authors and works can change the frame or being “out of frame” according to the devoted glance. For example, some of the authors, that we deal with, can easily be matched to contemporary artists for formal solutions and contents, but if you look at personal stories, then the comparison can be moved to the practices of an art considered marginal.

However I think that making – cautious and respectful – distinctions will be useful to understand contexts, practices and different intentions. The authors traceable in art brut, outsider art or irregular art produce primarily by dictated inner, driven by personal needs and urgencies that are produced in the physical and mental spaces intimate or protected. They can be authors in social marginality position or even not: visionary, graffiti artists, babelics, people with mental health or intellectual problems, homeless, prisoners or simple self-taught.

V.C.: How would you define your need to develop this project so that this artistic genre, always marginalized, is made known?
Tea Taramino: More than disclose a marginalized genre, I have always moved to search for points of contact with the world of contemporary art, build opportunities for exchange and meeting to share ideas and visions. Reshuffle the cards to avoid trapping people with a stigma and especially to investigate between the boundaries, as areas rich in sense, and at the same time enable relations to promote the individual artists, unfortunately in the shade, without too much care to the labels indicating the position of marginality, pathology, etc.
Here too there is a good and constructive correspondence of intent with Arteco.

V.C.: Archiving is a crucial and predominant phase of the project Mai Visti e Altre Storie as it is aimed at the protection, preservation and enhancement of the art so-called irregular. Such archiving phase is carried out by art historians specialized in cataloging that conduct their work according to criteria ICCD. How has formed the collaboration with the Arteco association which, using specialized personnel, in charge of the archives mapping in Piemonte?
Tea Taramino: Mai Visti e Altre Storie takes shape – progressively from 2012 – from the common reflections that emerged from the working group during the two editions of L’arte di fare la differenza. Working together for three years has been an important opportunity Wetherby for get in touch with Arteco and the Museum of Anthropology and Ethnography, but also to develop shared assessments and carry out a study of the European realities, the most advanced in the recognition of the independent and marginal authors.

The regional project Mai Visti e Altre Storie is cured with great professionalism, expertise and dedication, from the art historians with expertise in archiving as Beatrice Zanelli and Annalisa Pellino of Arteco – and other people of their staff as Elisa Campanella – in collaboration with the anthropologist Gianluigi Mangiapane, who works at the Museum of Anthropology and Ethnography of the University of Turin.

The project has been operating since 2015 with a mapping, constantly updated, of authors and contexts that proceeds with the gradual study of biographies, collection and photographic documentation of productions for inclusion on the site.

In parallel we organize exhibitions and editorial productions or art prints such as the project /maɪ prɪnt/ born as a sub-project of Mai Visti e Altre Storie, dedicated to the irregular art distribution through the creation of art prints in limited edition. This initiative – as well as enabling the reproduction of small and valuable series of works designed for a diversified  audience of stakeholders and clients – it’s  also a useful instrument for establishing good cooperative practices with national and international institutions active in the same field, through the exchange of themselves and / or works preserved in the archive.

/maɪ prɪnt/ also supports irregular authors, through remuneration from the sale of a part of the print edition at InGenio Bottega d’Arti e Antichi Mestieri – City of Torino and other channels.

V.C.: What public or private entities are involved in this process of cataloging?
Tea Taramino: There are about thirty of public and private entities scattered throughout the region but also beyond.
Promoters are: Superintendence for the Historical, Artistic and Ethno-anthropological of Piemonte and the Regional Directorate for Cultural and Landscape Heritage of Piemonte, the Ministry of Culture; Museum of Anthropology and Ethnography of the University of Torino; City of Turin, Department of Social Policy and Relations with Health Structures, Disability Service; ASL TO1, TO2 and TO3; Opera Barolo; Foundation Medicina a Misura di Donna; The Association Bandolo Onlus; Association Figure Blu Onlus, Centro Studi Bianca Tosatti, Parma. And as partners: 10 Torino Districts; Accademia Albertina delle Belle Arti in Torino; Department of Architecture and Design at the Politecnico of Torino; Department of Philosophy and Educational Sciences of the University of Torino; Primo Liceo Artistico of Torino; Education Department of the Castello di Rivoli; ” Lyceum-Formazione e Aggiornamento ” Milano; numerous social and cooperative associations in Piemonte.
Collaborate actively Opere Scelte Gallery and the spaces non-profit Ingenio Arte Contemporanea, Torino and Spazio Bianco of Torino  and Studio Dieci of Vercelli.