From what Prince Charles called incinerator to a People’s Palace.The fairy tale of the Library of Birmingham and how it can change people’s life.

Prince Charles once famously called Birmingham’s old central library an “incinerator”. It is has since been transformed into nine floor “people’s palace”.

The opening of the Library of Birmingham, the largest non national public library in Europe and home of one of the UK’s major photography collections, in the futuristic new building with its roof garden with wild flower,aims to bring traditional book lending into the 21st Century. There was a long debate whether to call this a library or not. According to Mr Brian Gambles, Director of the project, the whole idea of the library concept needs reinventing and as he said, there is the need of a change according to technology and the public’s needs.
The Library of Birmingham, a major new cultural destination, provides a showcase for the city’s internationally important collections of archives, photography and rare books. Birmingham Library is also a centre of activity for researching and exchanging knowledge about historical and contemporary photography. Very precious is the Sir Benjamin Stone Collection. Stone was a Victorian collector who was obsessed with collecting photography as a way to understand the world around him. He accumulated more than 100 albums of photographs, which were classified to reflect his interests in science and art, anthropology and customs from different cultures.

In 2012 with support from the Arts Council, the Library established GRAIN, an initiative to develop a strategic network for photography and photographers. This approach has empowered the Library of Birmingham to continue to collect historical and contemporary work, to commission contemporary work, to sponsor the work of photographers, to organise and put on exhibitions and to support the professional development of emerging artists and photographers.
GRAIN is just one of the many exciting new programs at the Birmingham Library. The Library Has an extensive Archive of postcards that bring back the “golden age” of the United States railways, with images of bus stations, airports, cogs and incline railways, bridges and docks. Many are from the first half of the 20th century. At the top of the library sits the Shakespeare Memorial Room, home to a collection of 43,000 books, including copies of the Bard’s First, Second, Third and Fourth Folio editions: one of the largest collections of Shakespeare in the world. A new gallery space in the Library opens up public access to the collections for the first time and a British Film Institute Mediatheque, providing free access to the National Film Archive. Other facilities include an outdoor amphitheatre,The Birmingham Repertory Theatre, a studio theatre and other performance spaces dedicated to contemporary art. By using new technology, everyone in the world from Birmingham can access the Library of Birmingham’s resources. Over three million visitors are expected each year and millions more online. 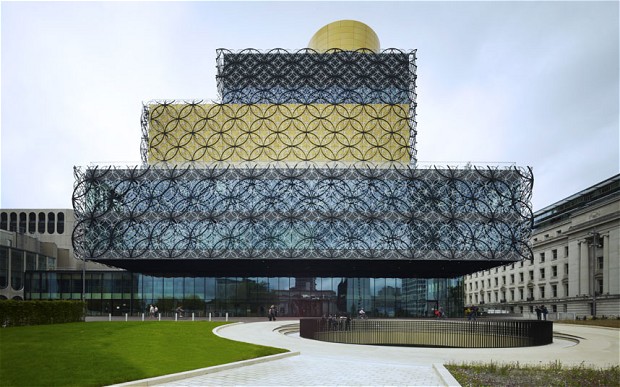 Described by the architect who designed the building and who believes in this project of the future,Francine Houben as a ‘People’s Palace’, the Library of Birmingham is highly family-friendly. It delivers services and dynamic mixture of events, and activities together with outstanding resources and exhibitions, through collaboration between the library partners and communities. As a centre of excellence for study and research, skills development, entrepreneurship, creative expression and much more, the opening of the Library of Birmingham seems an emphatic public endorsement of the value of archives and libraries at a time when local libraries elsewhere face neglect and closure.