What attention to common goods? The first edition of Festival in Chieri

Sunday 12th July ended the first International Festival of the Commons Goods which featured different characters from  the political landscape and international culture.

Many personalities discussed and took part in the debate focused “on the forms of life and collective production”. Festival opened with the “missed” encounter between Gustavo Zagrebelsky and Salvatore Settis. The absence of the great archaeologist has been felt only in part; the constitutionalist addressed the topic of common goods starting from the Italian cultural heritage threatened by its own State. An issue raised several times by Salvatore Settis and extremely timely given the recent Greek implications, that should be more emphasized by Italian people as Italy remains one of the countries with the highest concentration of historical art that often, groped to respond to the economic crisis, becomes a tool to sell off almost like as “family jewels”. State failure, defined as a commercial enterprise, means just that: the sell-off of the cultural heritage.

Zagrebelsky used the metaphor of the mythological figure of Uroboro, biting and nihilistic animal able to devour itself, just like “Italy SpA” is doing with its cultural heritage, in a short-sighted economic policy careless to the protection of our national identity and historical memory. 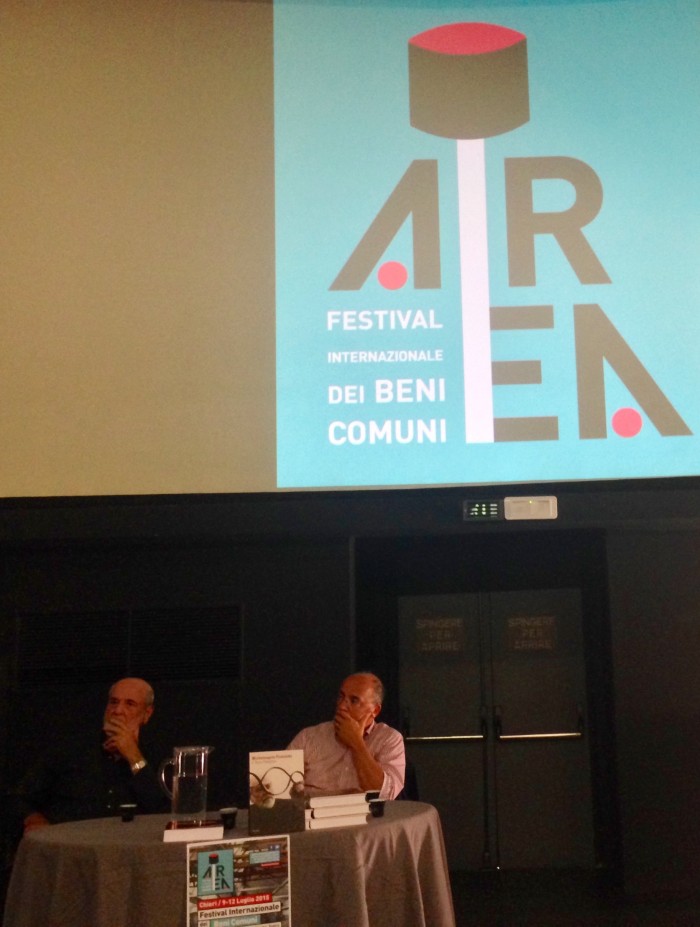 Pistoletto and Iannini speaking at the Festival of Common Goods

Many other speakers continued to talk about common goods as Michelangelo Pistoletto. The artist representative of Arte Povera, brought his testimony through his exprience of Cittadellarte highlighting – with the metaphor of “mirror painting” – the significance of the relationship between the visitors and the contemporary art as an active and participative experience rather than a pure aesthetic event. A witness to this new role of pragmatic artist embodied in the social environment is represented by the works showed by the artist Piero Gilardi. Being another exponent of Arte Povera, he has pursued his artistic mission through animation and participatory politics. Gilardi, despite not having been called upon to take an active part in the discussion on the commons goods, was present with his works, Tappeti natura and Ecoagorà, small wooden amphitheater designed to accommodate people and objects related to agriculture and renewable energy sources. This work embodies all his thought on the environmental risks and the need to reflect on a controlled decrease due to the lost of the certainty of earth’s renewal, as it was remember by a further protagonist of the festival, the jurist Stefano Rodotà.

In the four-day event there were lots of meetings and many reflections focused on common goods of all kinds. To build a more equitable social vision we are all called to participate.