Writing the thesis, two masterpieces of the Veronese resurface

We are talking about two allegories, the Sculpture and the Geography, that will be exposed up to October 5 to the Palladium Museum of Vicenza, together with theirs two pendants of the Los Angeles County Museum of Art.

But let’s see how this story starts…

Alice Legè. First of all we would like to know how yours researches commenced, and how you bumped into Veronese’s masterpieces.

C.M. I started my researches in 2012, when together with Giovanni Agosti and Jacopo Stoppa, we decided to address my master degree’s thesis toward a thematic that was near to me. I am native of Verbania, so we start to talk about Villa San Remigio, in Pallanza, a great palace in Renaissance style, situated next to Verbania. The building was projected at the thresholds of the Nineteen century by the marquis Silvio della Valle di Casanova and his wife Sophie Browne, an Irish painter and sculptress. During my researches I focus on the reconstruction of the interiors design and particularly on collection of works of art, supported by some ancient photos.
The garden, the villa, the furniture and the paintings was acquired by the Regione Piemonte in 1977: unfortunately during the years the collection impoverished after some thefts.
In February 2013 I entered in Villa San Remigio, it was closed until some years, but once it was a center for cultural happenings and marriages. Here I bumped into some important pieces that belonged to the collection of della Valle di Casanova, currently property of the Region, and that weren’t considered for their real value. Besides a great telero of Palma the Younger destined to the church of San Domenico in Brescia and considered as lost in the catalog of the painter, I noticed in Villa San Remigio’s dining-room two high quality canvases with an allegorical subject. The property’s inventories attributed these canvases to a generic “school of Paolo Veronese” with an estimated value of 7000 Euros. With Giovanni Agosti and Jacopo Stoppa we realized that that the quality of the two painting was so high to be attributed to the hand of Veronese himself.
Therefore we involved the professors Romani and Crosera of the University of Padua; thanks to the contribution of Vittoria Romani the masterpieces were recognized as autograph of Paolo Veronese, as two elements of a lost cycle conceived during the firsts years of the activity of the painter.

A.L. This is without doubt an exceptional discovery, that leaves a sign in the career of a young researcher. Beyond the academic satisfaction, you must lived some moments of real emotion. How did you feel in front of an important result like that one?

C.M. I am undoubtedly satisfied about the results that I reached. Even starting from a modest number of sources my studies reached a meaningful result. This is an important discovery and I am glad also because I had the chance to work in a team where each one collaborated with his own resources and competences, far from any media-sensationalism, and focusing on the protection of the two canvases. This job of research has impassioned me since the beginning; this important discovery gave to me the occasion to work with and to assist side by side competent and experienced people, from which I tried to learn as much as possible.
You begin with a thesis of research and you end up in the Venaria’s restoration laboratories thinking about the radiographies of two paintings of Veronese. After that you see the two restored canvases in an exhibition in Vicenza, placed side by side to their two twin paintings in loan from Los Angeles. Yes, I can say that this was an adventure full of emotions and satisfactions. 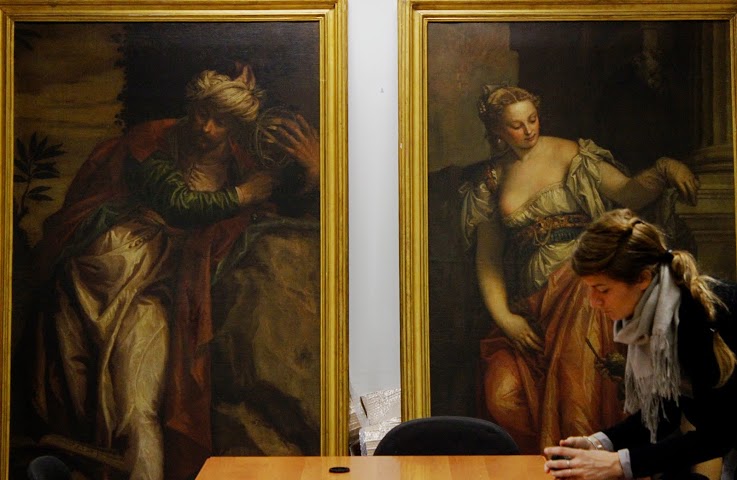 A.L. Your job falls in a particularly fortunate period. In fact this year, besides the Vicenza’s exhibition, other four shows about Veronese take place: in Padua, in Castelfranco Veneto, in Bassano of the Grappa and above all in Verona, in collaboration with the National Gallery of London. How the relationships between a young student like you and these noteworthy institutions were developed? How much had you been involved?

C.M. I had always been considered. The institutions personally consulted me and I was invited to the vernissages of Veronese’s exhibitions. Xavier Salomon, the Frick Collection’s curator, invited me to the National Gallery of London to visit his show about Veronese: he was always helpful and generous. The researchers that I met in Venaria, in Verona and in Vicenza always complimented with me for the canvases’ discovery and they always kept me informed about the studies’ and restoration’s advancement. As I mentioned before, there was a real team-job addressed to the guardianship and the maintenance of the canvases, always focused on the scientific rigor. The two works had put in safety, restored, studied and finally exposed in Vicenza thanks to the job of people like Giovanni Agosti and Jacopo Stoppa of the Università Statale di Milano, Vittoria Romani and Carlotta Crosera of the Università di Padova, Guido Beltramini and Howard Burns of the Centro Palladio in Vicenza and the Venaria Reale’s Restauration Laboratories
We worked hard to compile an exhaustive catalog about the critical history of the two Veronese’s allegories, and today for the first time they are shown to the public together with the two twins allegories of the County Museum in Los Angeles.